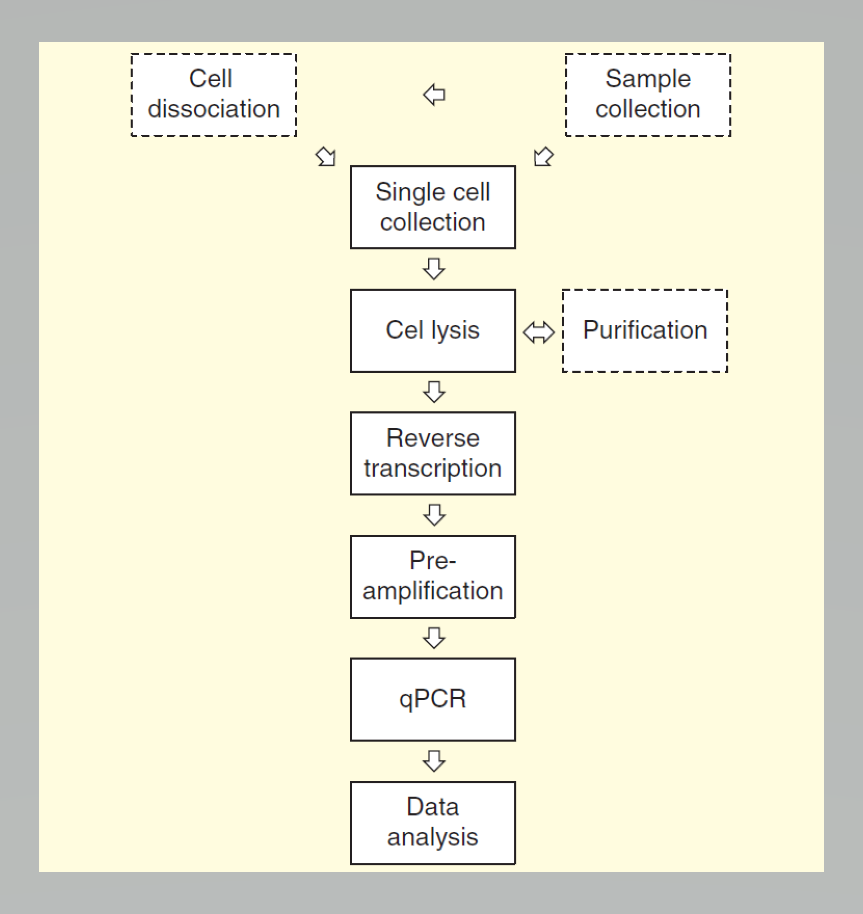 The project develops tools for the spatio-temporal analysis of the expression of genes with the help of RNA-Seq and high-throughput RT-qPCR at the tissue, unicellular and sub-cellular level, including multidimensional data analysis. We aim to develop more powerful methods for diagnostics, disease monitoring and progression of complex human diseases, such as cancer, based on the prevalence and phenotypic profiling of rare disease determining cells.

Single-cell gene expression profiling is revolutionizing the exploration of expression pathways, networks and biomolecular interactions. This field is currently in rapid development, both theoretically as well as experimentally. To ensure high quality of data, we continuously develop new approaches for quality control and data analysis. In the past, we presented a method for the effective RNA extraction from single cells, a method to control gDNA contamination or the quality of RNA, described the advantages in measuring bulk samples in single cell experiments and also participated in establishing guidelines for gene expression profiling (MIQE guidelines).

MicroRNAs are a class of small non-coding RNAs that serve as important regulators of gene expression at the post-transcriptional level. They are stable in body fluids and pose a great potential to serve as biomarkers. We developed a highly specific, sensitive and cost-effective system to quantify miRNA expression based on two-step RT-qPCR with SYBR-green detection chemistry called Two-tailed RT-qPCR. It takes advantage of novel, target-specific primers for reverse transcription composed of two hemiprobes complementary to two different parts of the targeted miRNA, connected by a hairpin structure. The introduction of a second probe ensures high sensitivity and enables discrimination of highly homologous miRNAs irrespective of the position of the mismatched nucleotide. Currently, the method is employed in various projects, including the role of miRNA in spinal cord injury and also in the progression of viral infection.

Our group uses the African clawed frog model for three main projects – asymmetric localization of biomolecules during oogenesis and early development; regulation of wound healing and regeneration; and study of role of nitric oxide during early embryogenesis. We developed techniques for spatial and temporal expression profiling using RT-qPCR and more recently RNA-Seq, and we have combined them with functional experiments using microinjections and phenotype analysis such as in situ hybridization and imaging.

Asymmetrical localization of RNA and proteins is the main factor behind cell specification and differentiation. Early development is a great model, because asymmetry can be observed even in oocytes and eggs.  We use primarily the Xenopus laevis model to identify groups of localized RNAs and proteins, and rely on Bioinformatic analysis to assist with the determination of localization motifs and elements in the RNA molecules. We study all main developmental axes: both the oocyte and egg to study animal-vegetal axis (ectoderm – endoderm); 2-cell stage embryos for left-right asymmetry; and 4-cell stage embryos and older for dorsal-ventral axis. Recently, our collaboration with the laboratory of Prof. Dovichi in USA has been successful in also measuring protein asymmetrical profiles and their uneven distributions within the blastomeres of developing embryos. Our research in this field has led us to the discovery of a new group of transcripts with animal localization and also the identification of several new localization motifs within the vegetally localized transcripts. In addition to Bioinformatics, we also test validity of localization motifs using functional experiments. In 2018, we started new collaborations using fish and mammalian egg models.

The role of nitric oxide during development

The nitric oxide molecule is used extensively in various biological systems. Our research on the role of this molecule has shown that it is essential for head development and skin formation. We have also observed that this molecule is strongly produced in ciliated and secretory cells and it is required during the initial steps of epidermis formation. Our lab also study the role of nitric oxide during wound healing and regeneration. We found that nitric oxide is strongly produced in just a few minutes after injury and that it has a key role in gene expression activation.

The main aim of our project is to uncover the molecular mechanisms and signalling networks regulating embryonic wound healing and regeneration. It utilizes the unique combination of state-of-the-art transcriptomic and proteomic approaches, followed by candidate selection using bioinformatic analysis and functional analysis of candidates during wound healing and regeneration. Our results can be used for the identification of therapeutic targets to improve the treatment of chronic wounds and burns. Embryonic healing and regeneration are both fascinating biological processes and amphibians including Xenopus embryos are among the most efficient model species for their study. We have performed large-scale analysis of healing using transcriptomic and proteomic analyses and identified several signalling pathways and genes, which we are currently studying in more details. Recently we have developed an efficient workflow for single cell expression analysis and have used it to determine cell specific regeneration processes at the single cell resolution.

In the field of Neurobiology we are interested in the characterization of glial cells after brain and spinal cord injuries and in the progression of neurodegenerative diseases, especially of Alzheimer's disease and amyotrophic lateral sclerosis. Currently, we are studying the role of Wnt- and Shh-signaling pathways in proliferation/differentiation of NG2 glial cells, the role of Trpv4 and Aqp4 proteins in cell volume regulation, or mechanisms of microRNA regulation in the nervous tissue following spinal cord injury and stroke. In these projects we apply the most current approaches for gene expression analysis in the field, such as single cell gene expression profiling and RNA-Seq.

Stroke is the third leading cause of death in industrialized countries and leads to serious, long-term disability for survivors. Glial cells, comprising astrocytes, oligodendrocytes, microglia and NG2 glia, represent homeostatic systems that regulate all aspects of CNS function and may have beneficial as well as detrimental effects on the outcome of ischemic injury. The mechanisms involved in reactive glial functions are still not well understood and are studied within this group of projects. We are interested in the role astrocytes and NG2 cells in pathophysiology of ischemia, we study their dynamics, differentiation and proliferation capacity, age-dependent changes in their function and structure, role of specific regulation pathways and proteins, or similar expression patterns in different types of CNS injury.

Amyotrophic lateral sclerosis (ALS) is a progressive neurodegenerative disease that affects the upper and lower motor neurons and results in progressive paralysis, with a mortality within 2-5 years after the onset of disease. Although ALS is characterized by the selective death of motor neurons, glial cells and their communication processes play a key role in its pathology. While the importance of astrocytes and microglia in the development of ALS has been already described, the role of other glial cell subtypes such as oligodendrocytes and NG2 glia remains unclear. The aim of this project is to identify the changes in astrocytes, microglia and NG2 glia/oligodendrocytes in ALS progression at the level of gene and protein expression. Furthermore, we aim to clarify the changes in their functional properties, especially the homeostatic functions of astrocytes, and the role of NG2 glia in oligodendrogenesis and myelination of axons.

Central nervous system (CNS) injury triggers a multitude of pathophysiological events that are tightly regulated by expression of specific genes. Recent studies have demonstrated, that microRNAs (miRNAs) – short non-coding RNAs that modulate protein expression levels by antagonizing mRNA – are dysregulated following different types of CNS injuries. This observation has sparked a significant amount of attention into the potential use of microRNAs as therapeutic targets. To understand the mechanisms underlying gene alterations following spinal cord injury and ischemic stroke, we examine temporal expression of miRNAs and mRNAs in the nervous tissue in mice and rat models. The most promising miRNA-mRNA regulatory networks are validated in vitro and in vivo using a combination of tools for RNA, protein and functional analysis to verify the true biological relevance of our findings.

You can look on this page for more info.